On the birthday of Johannes Schreiter

Prof. Johannes Schreiter is regarded as one of the most influential post-war German glass artists, whose work is received and recognized internationally.

“No other living artist has embodied modern stained glass as Johannes Schreiter. Schreiter’s style is to some extent the personification of the late modern epoch. His distinctive, individual style, […], has generated an influence over decades, which makes it difficult for the next generation of artists to depart from this archetype.”[1]

Johannes Schreiter has not only had a lasting effect on the genre of modern stained glass, his work has also affected the handicraft. We have been permitted to accompany Schreiter’s artistic development for over 60 years. His designs have repeatedly tested our craftsmanship and challenged the boundaries of our materials.

Johannes Schreiter sees himself as an artist and illustrator, who discovered the medium of glass in the late 1950s. In 1958 he designed his first window for St. Luke’s church, Bonn, which within a year was being executed in stained glass at our former workshop in Rottweil. In his early phase, Schreiter also experimented with the then prominent technique of dalle de verre. He completed several projects with the assistance of the studio in Rottweil, which was specialized in this new technique, including, among others, the window for the Diocesan Chapel in Johanniskreuz (Pfalz) in 1961.[2] 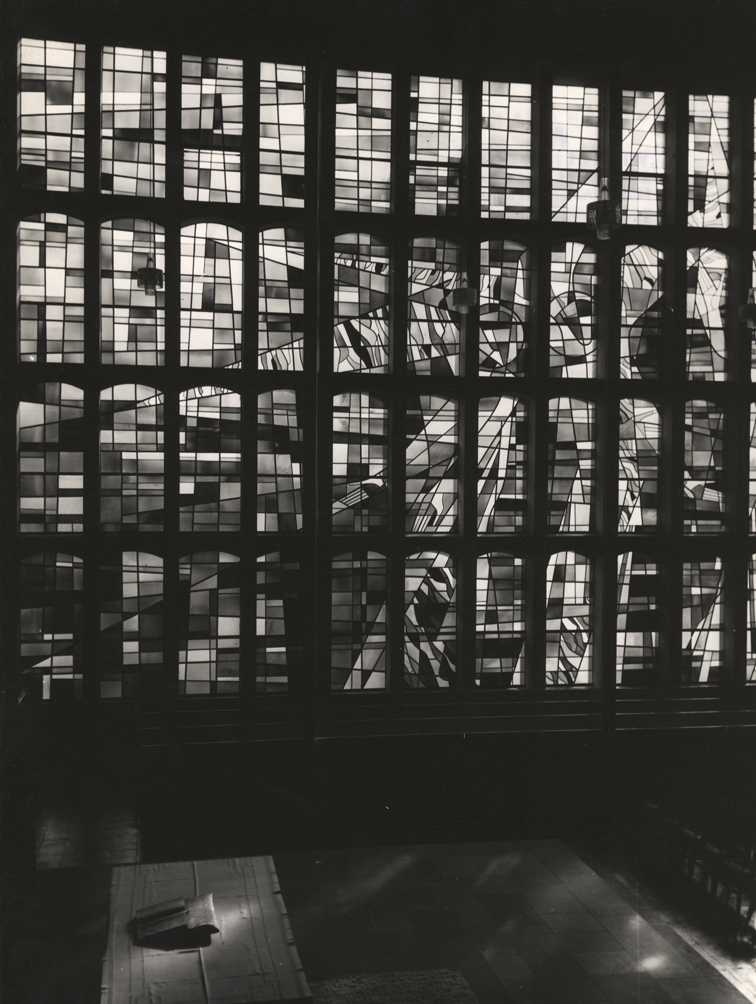 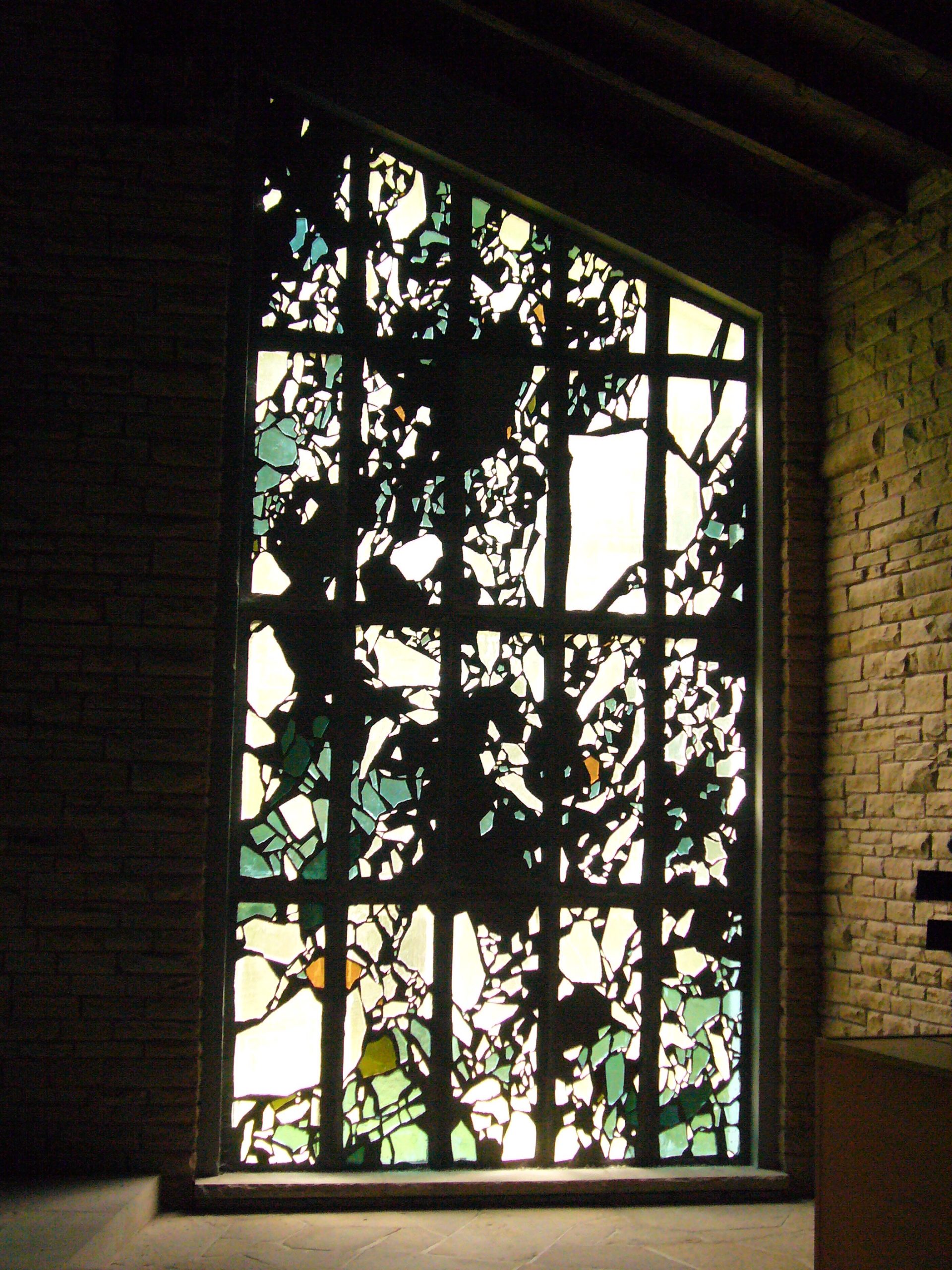 In the following years, a close relationship developed between Schreiter and the workshop team in the subsidiary in Wiesbaden (opened 1955, from 1973 at its current location in Taunusstein-Wehen). In the workshops, a multitude of major projects were created, including the windows for the Church of Our Lady (Notre-Dame) in Douai, France, 1976. Multiple works from this period include complex network and grid structures, as in the windows for St. Mary’s Church (Marienkirche) in Lübeck, 1981. At first sight, the patterns appear organized and predictable, yet there also exists elements of disintegration, deterioration and fragility, symbolized by single lines or configurations which open up. Our craftsmen converted these designs into complex stained glass windows. Each individual piece of glass was selected by Schreiter himself according its hue from the sheets hand-blown of glass. 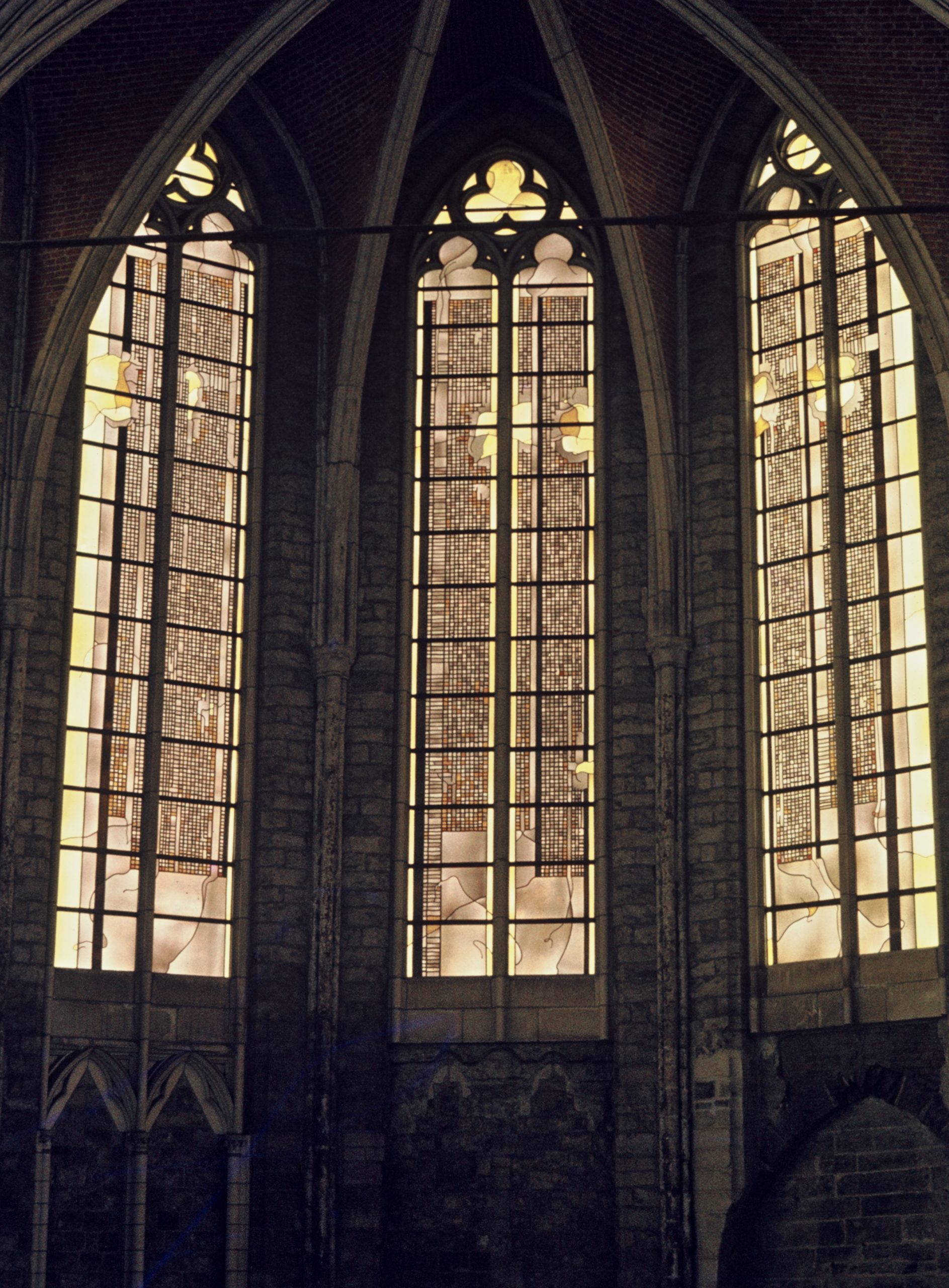 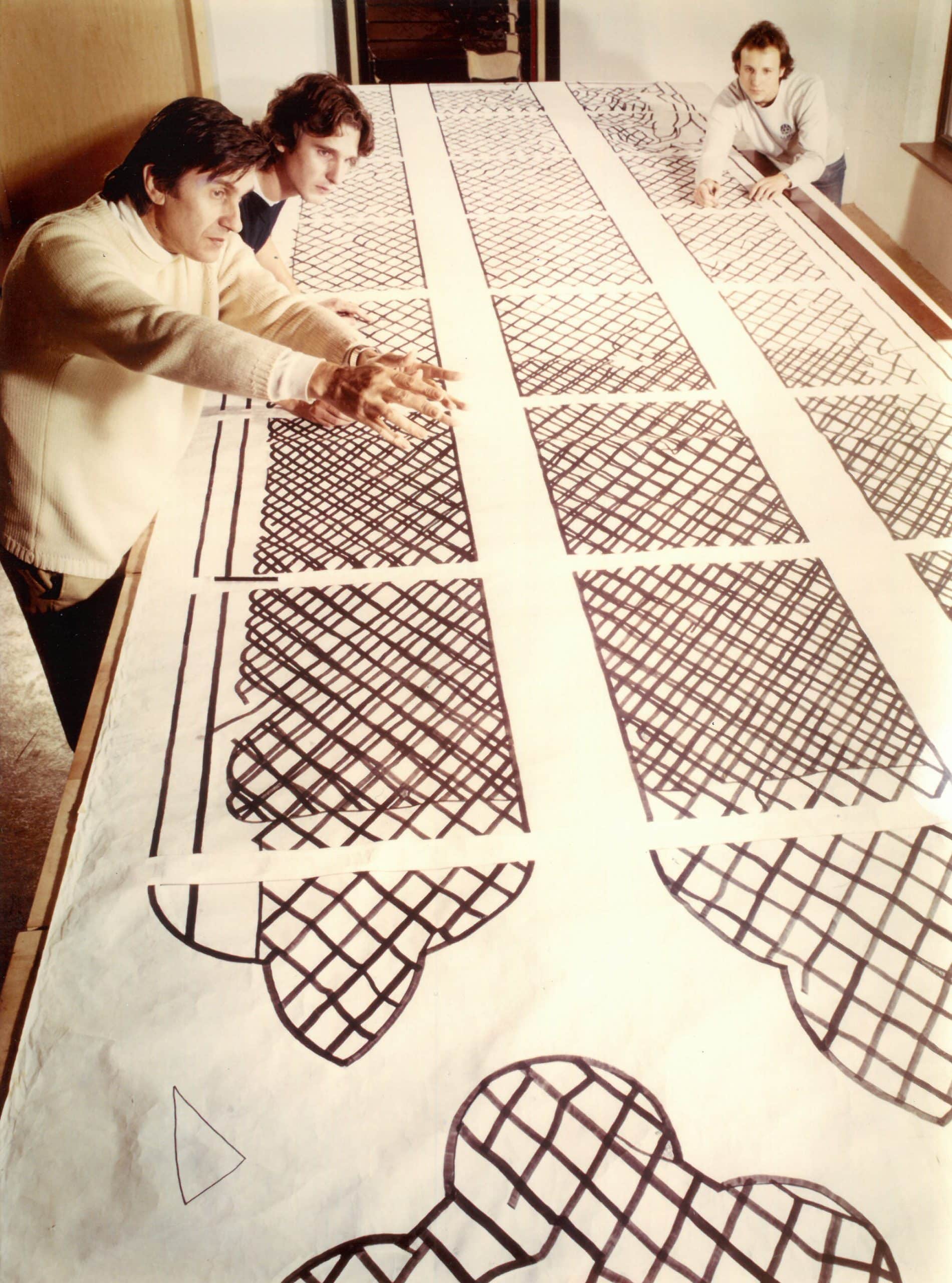 Since the beginning of the 1980s, Schreiter had been intensively searching for possibilities to convey his technique of Brandcollage [burnt collage] into glass, which he had developed during the 1950s. One of Schreiter’s most important symbols, the burnt form as a dark, emerging smoke bubble was to be created realistically in glass. As attempts to translate the delicate, homogenous color gradations with paintbrushes did not achieve the desired results, the team experimented with airbrush techniques for the first time in the history of stained glass. Dissolved glass paint would be applied to the glass very thinly and in multiple layers using a spray gun and air pressure. Substantially involved in the development were Andreas Otto, Karl Heinz Traut, Victor Baumgartl and Ingo Enzmann. 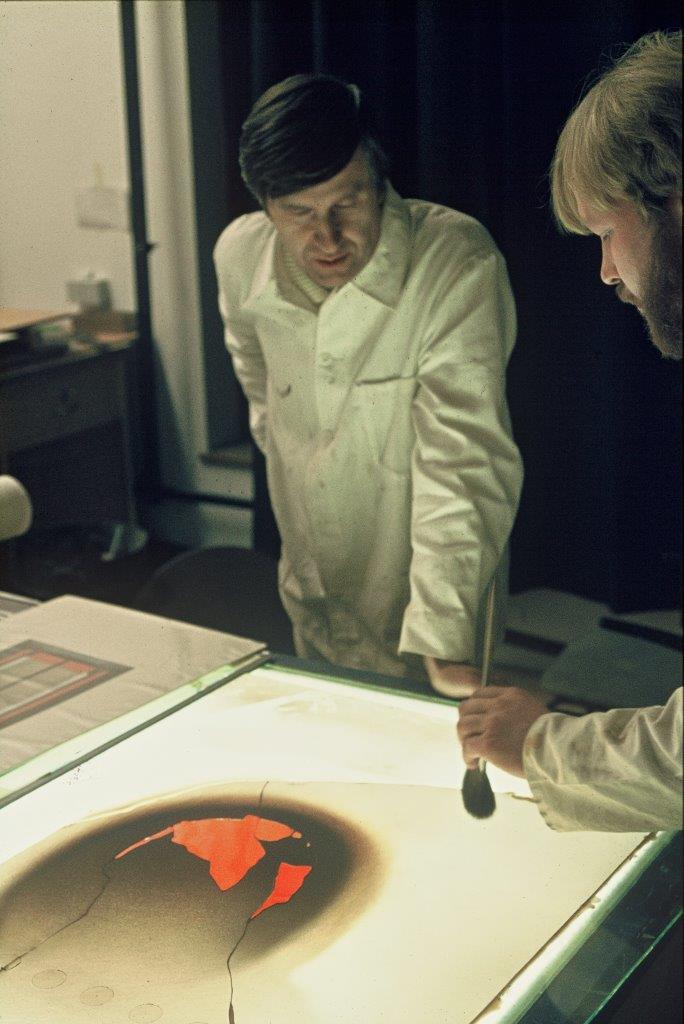 In the following years, these and other techniques would be honed to perfection. In the late 1970s and early 1980s, Schreiter began using Plexiglas (acrylic glass). During this phase, much experience was obtained in manipulating the lead came in several different ways. The experience gathered by our craftsmen was utilised by Schreiter for his work in glass, whereby the expressive cames have established themselves as his “trademark”:

“These unique lines, which completely extricate themselves from the constructive pressures of the lead borders of traditional stained glass, have always been the main fascination of Schreiter’s imagery […]. Precisely guided through the different sections of the image, these lines hint to a diagram of an uncontrollable ambivalent sensation, making anguish and compassion, yet also aggression visible. In the lines, emotions which accompany the pictoral creation, as well as the appraisal, are freed.”[3] 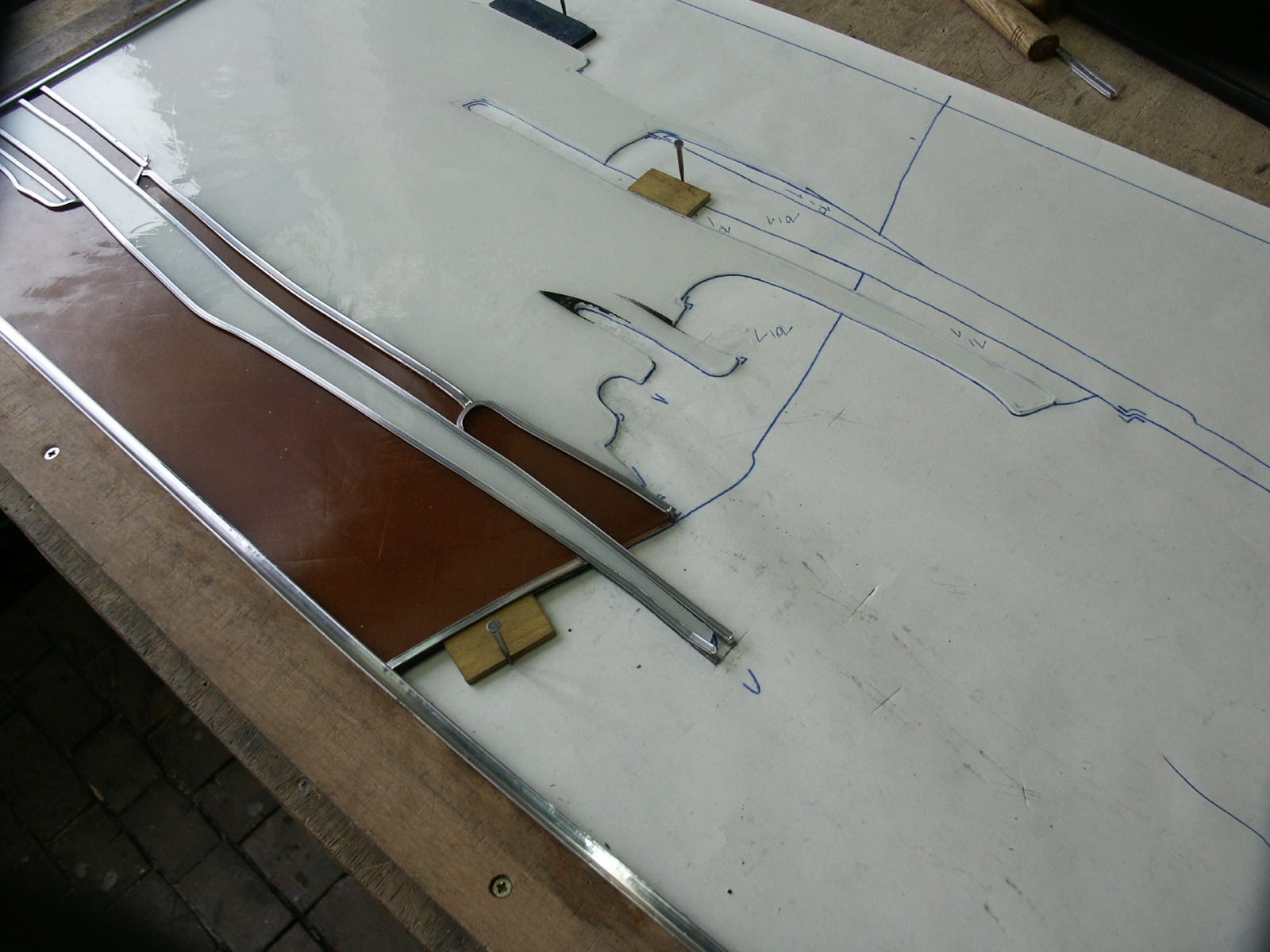 Looking at Schreiter’s work from a craftsman’s point of view, the last three decades are characterized by a combination of various, highly perfected techniques: homogenous, flowing transitions, manually etched and airbrushed; manipulated lead cames, carved, pried open and – not visible to the untrained eye – continued in enamel. The innovation is no longer just in the development, rather in the linkage to existing techniques – always with the intention of meeting the artist’s demands and doing the best justice to Schreiter’s original designs

Working into old age, Schreiter still continues to specify his designs at a scale of 1:1, personally selecting the colors in our workshops as well as perfecting the design during realization. It is these high standards which challenge and inspire our craftsmen and innovate our handicraft. We are proud to have supported Johannes Schreiter over the decades in his work and thank him for the close and trusting collaboration. 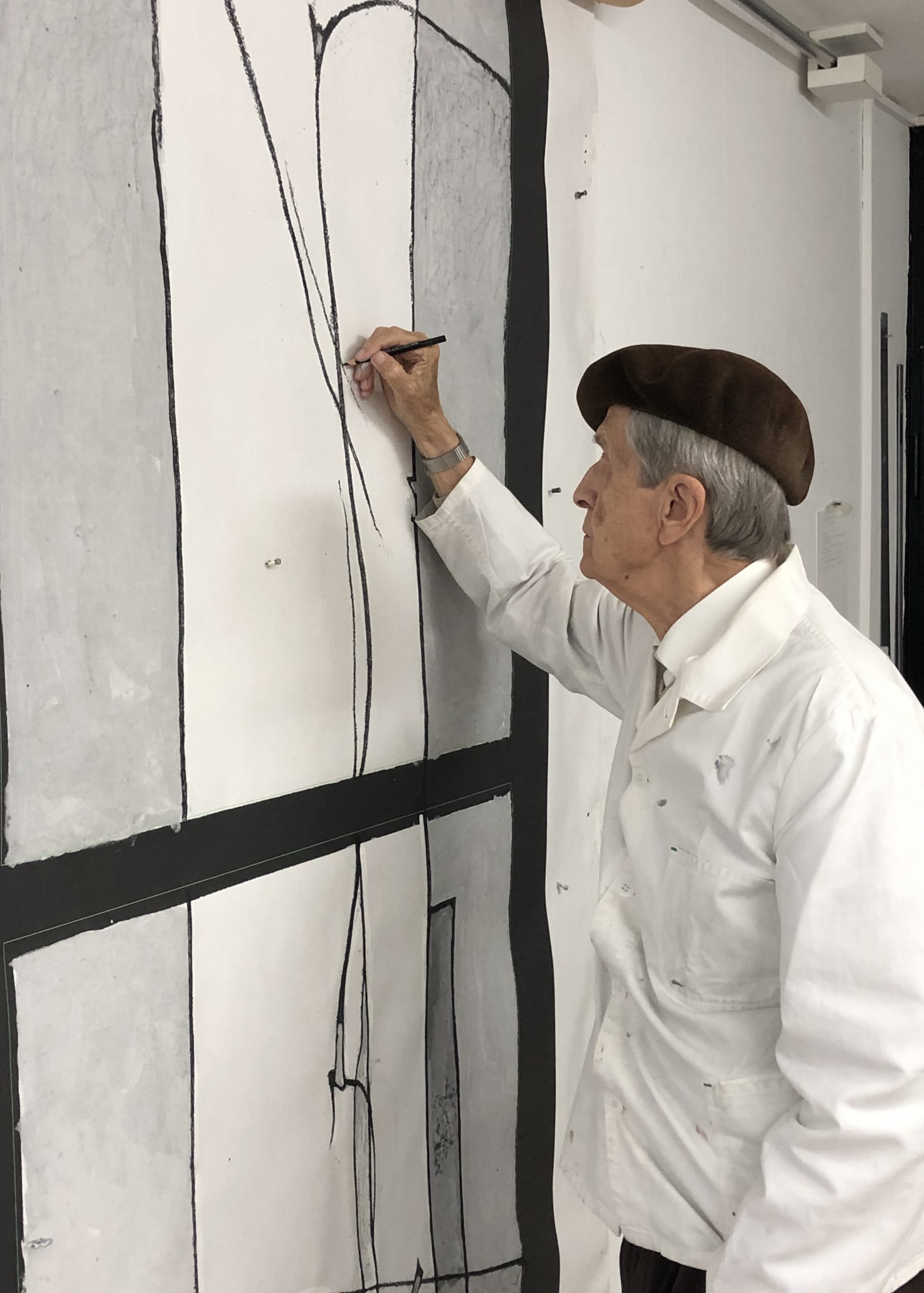 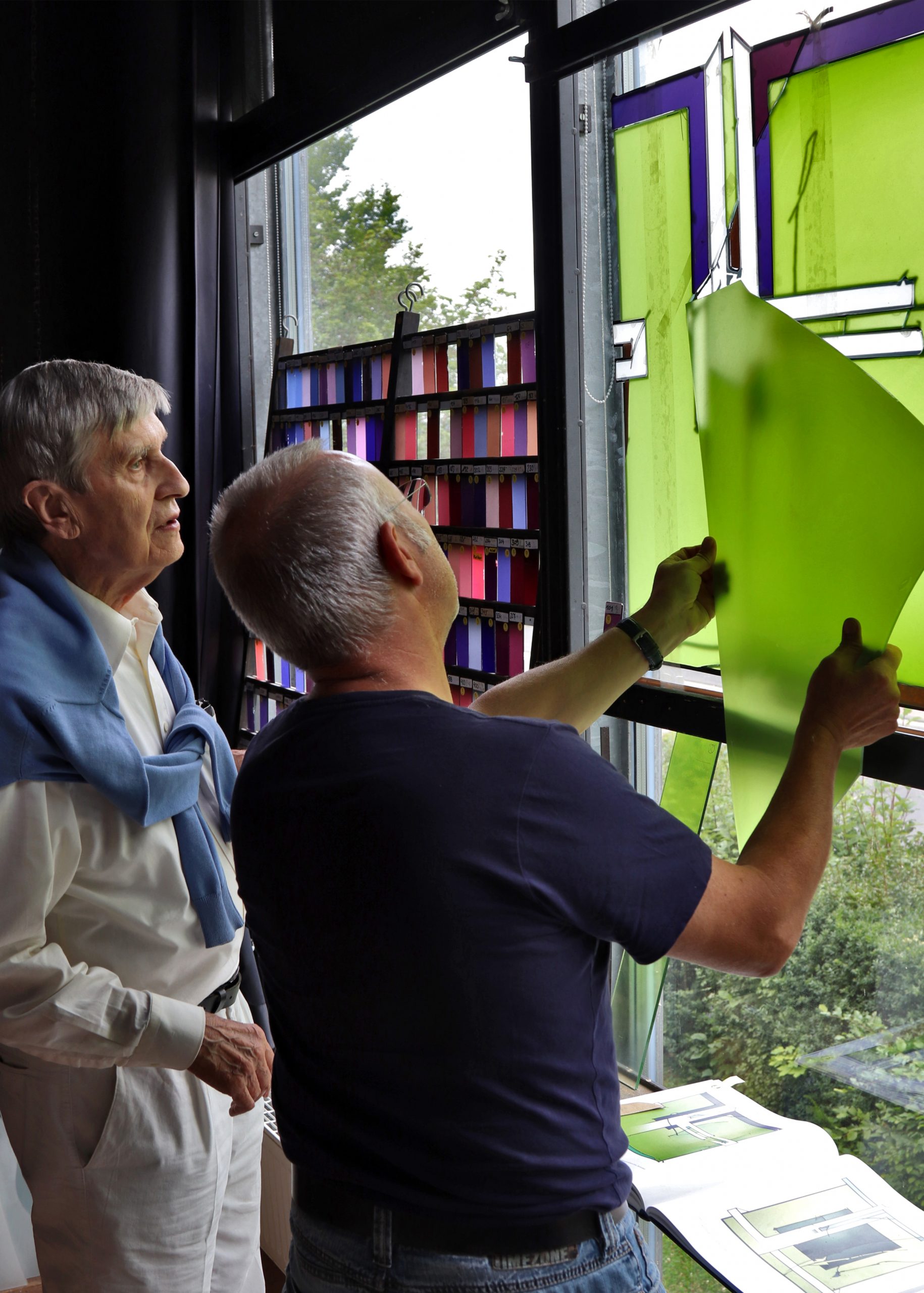 Today we want to say one thing first: Congratulations! Johannes Schreiter celebrates his 91st birthday this week. Everyone in our team sends their congratulations and wishes Prof. Schreiter another wonderful year.

Did we spark your interest? Discover more about the later works of Johannes Schreiter in the current publication by Gunter Sehring: Johannes Schreiter 2011–2017. Works in glass. Werke in Glas. Sketches. Illustrations. Texts (in German) [Link]. You can also order the book from us in a strictly limited edition with a unique finished glass plate, signed by Johannes Schreiter. You can find more information here. [link]. 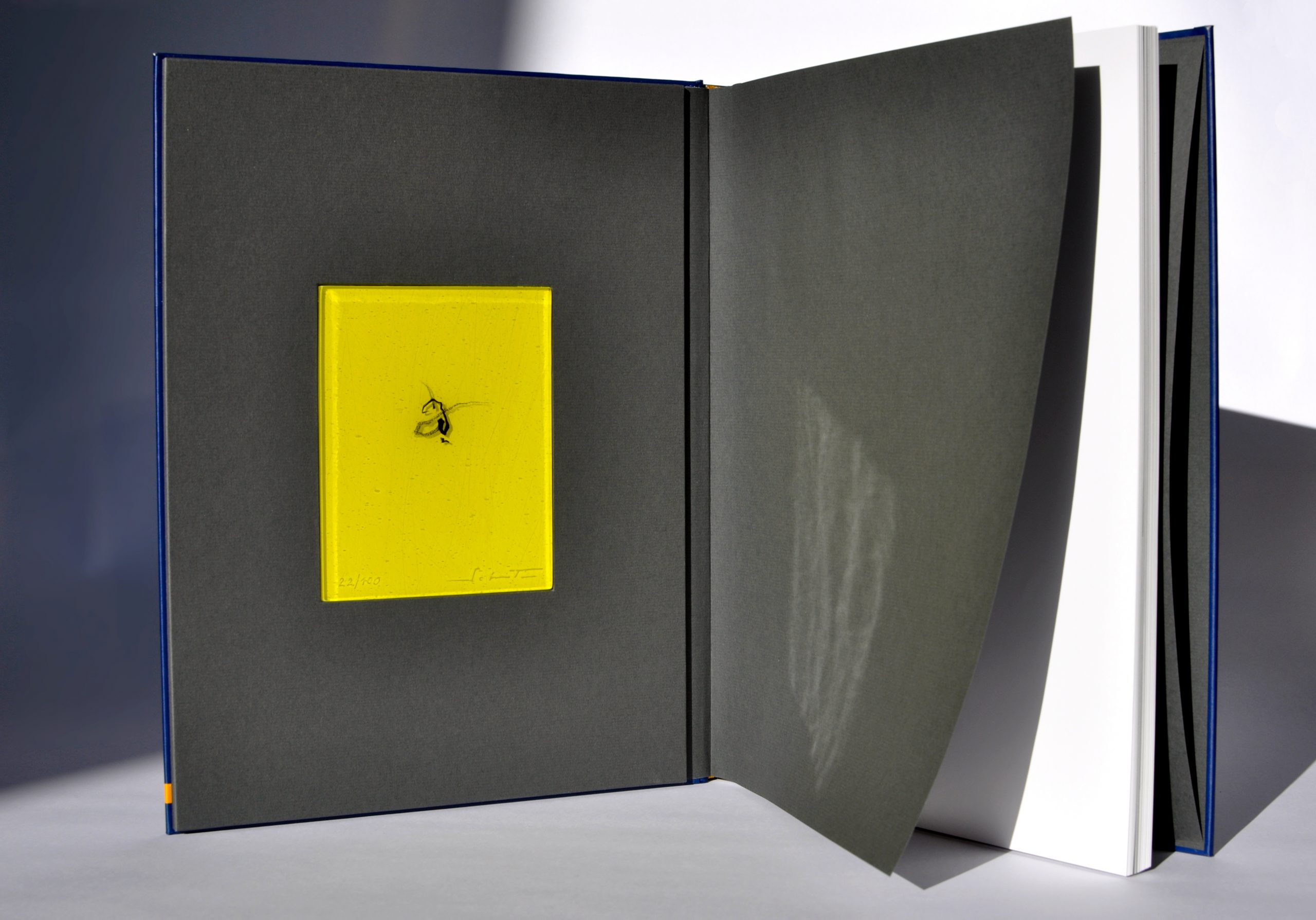 [2] Ludwig Derix, at the time managing director of the Rottweil studio, was also a trained stone mason, who used his knowledge to help advance the technique. The Rottweil studio also fabricated some of Jochem Poensgen’ earlier Dalle de Verre windows, including the windows for St. Suitbert in Ratingen.